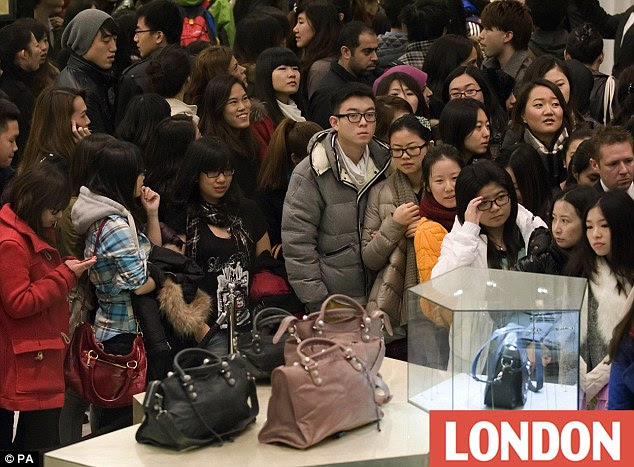 Out to bag a bargain: Young, mainly Far Eastern shoppers survey the goods at Selfridges in Central London
Now, thanks to good exchange rates and booming overseas economies, London has become the number one destination for luxury goods tourism.

In a welcome Boxing Day boost for hard-pressed retailers:
■ Thousands queued for Next’s 6am opening at 400 of its stores
■ Selfridges enjoyed its best hour of trading in history;
■ More than half a million shoppers crammed into London’s West End;
■ Analysts estimated that £22.8billion will be spent by the third week of January – £338million more than last year;
■ Internet purchases boomed with many retailers starting their online sales on Christmas Day – John Lewis reported a 19 per cent year-on-year increase;
■ More than 230,000 shoppers visited Birmingham’s Bullring and 125,000 flocked to Liverpool’s One store in the city centre. 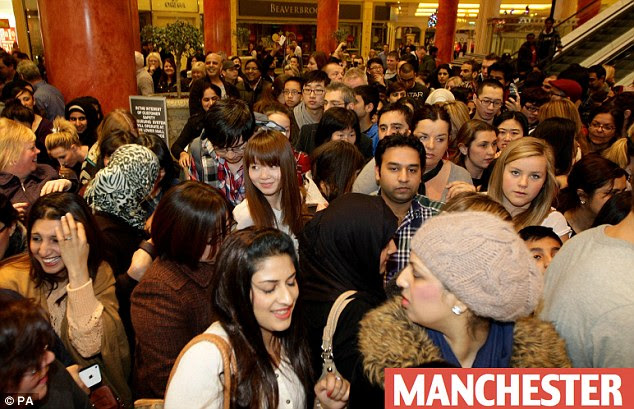 Crush: Shoppers at Selfridges in the Trafford Centre, Manchester, feel the squeeze 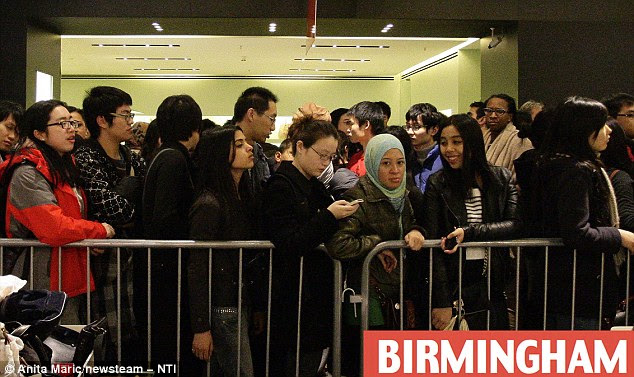 Hunting the best buys: Queues form outside Prada in Birmingham
At the two Westfield shopping malls in London, thousands of international visitors had flocked to the sales in the hope of bargain designer goods. Students Melody Wang, 24, and Doreen Nie, 20, from Xining in China, were shopping for cosmetics, handbags and belts for themselves and their mothers. 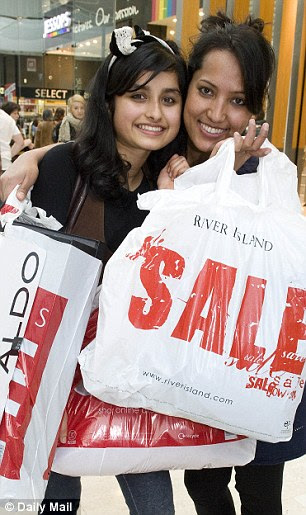 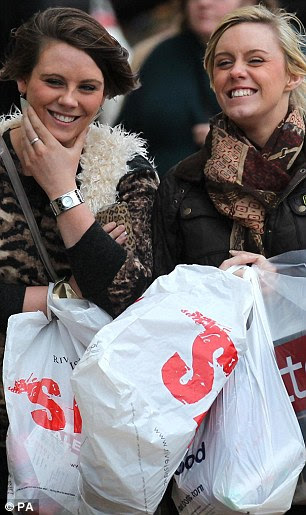 It's in the bag: These women smile for the cameras during expeditions to Westfield shopping centre in west London (left) and Princess Street in Edinburgh (right) 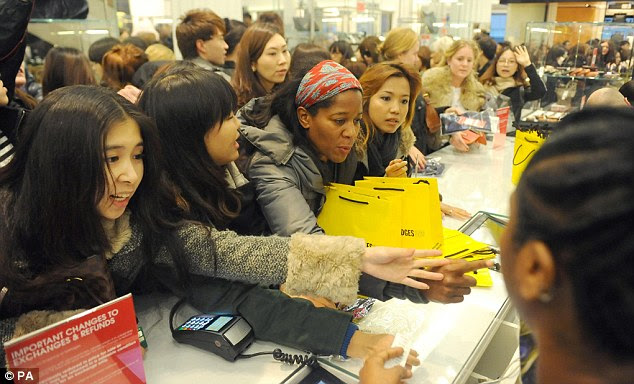 It's mine! Shoppers crowd at the tills in Selfridges, on Oxford Street, central London, as the department store opens its doors for the Boxing Day sale 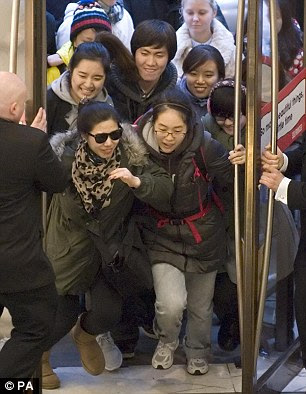 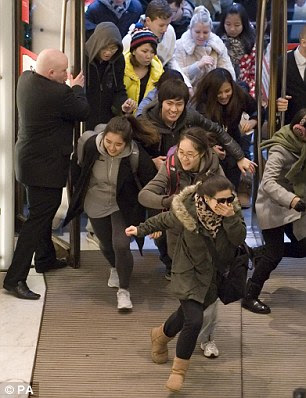 Let us in! These desperate shoppers burst through the doors of the department store to snap up bargains 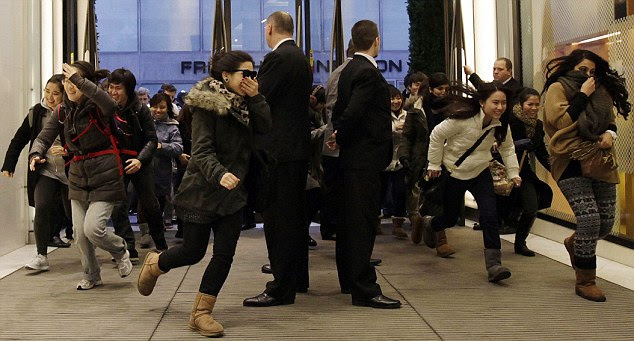 Every shopper for themselves! The shoppers swarmed Selfridges and dashed to the shelves to spend their money 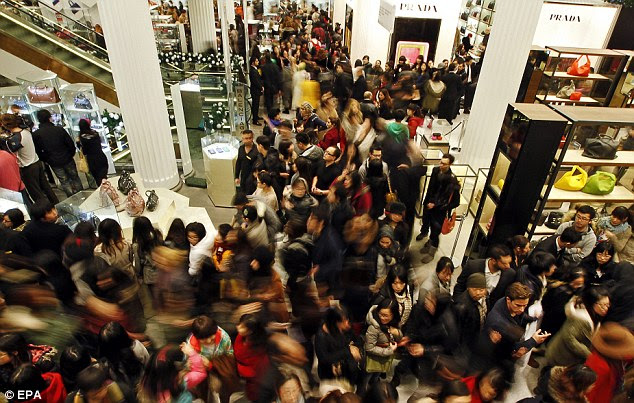 Boxing Day blur: The shoppers crammed themselves in as businesses slashed their prices

THE HAVES AND THE HAVE-NOTS

Millions of Nigeria’s inhabitants are struggling to survive, with seven in ten languishing below the poverty line.
But its tourists with expensive tastes have become an unlikely saviour for Britain’s high-end retailers.
A new class of super-rich consumers from the oil-rich West African country have overtaken Chinese tourists as one of the biggest spenders per head on luxury items in the UK.
In an extraordinary display of ‘Abuja Abundance’, they splurge an average of £1,648 on each visit. Only wealthy visitors from Saudi Arabia and Kuwait spend more.
Miss Wang, queueing outside Louis Vuitton, said: ‘What are we shopping for? One word – luxury!
‘Everything is much more expensive in China, and designer brands never go on sale there, so it is much cheaper here in the UK.
‘My mother asked me to get some Lancome beauty products for her, maybe a Gucci or Louis Vuitton handbag and a designer belt. I’ve got some Estee Lauder products for myself, and Doreen has bought a Prada handbag for her mother. Chinese people definitely come to the UK specially for the sales.’
Dan Li, 22, was shopping with her mother Zhang Ya Guan, 47, both from Beijing. Miss Li said: ‘We came specially for the sales. So far I’ve bought a Prada bag for £644, down from £999, which is much cheaper than in Beijing.
‘The Prada bag is for my mum, and I want a Gucci bag. Maybe we’ll spend around £800 but it would be twice as expensive in China as the duty is so high.’ 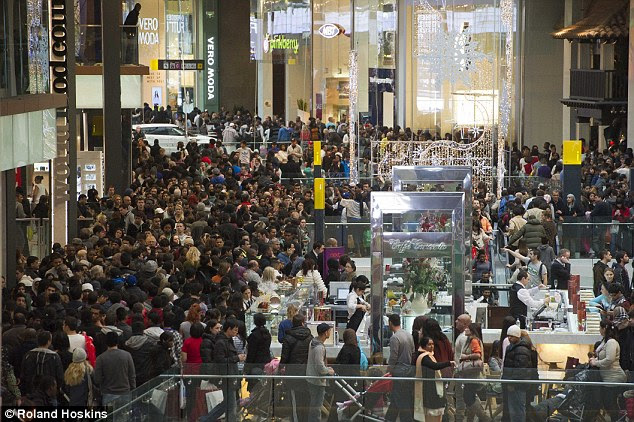 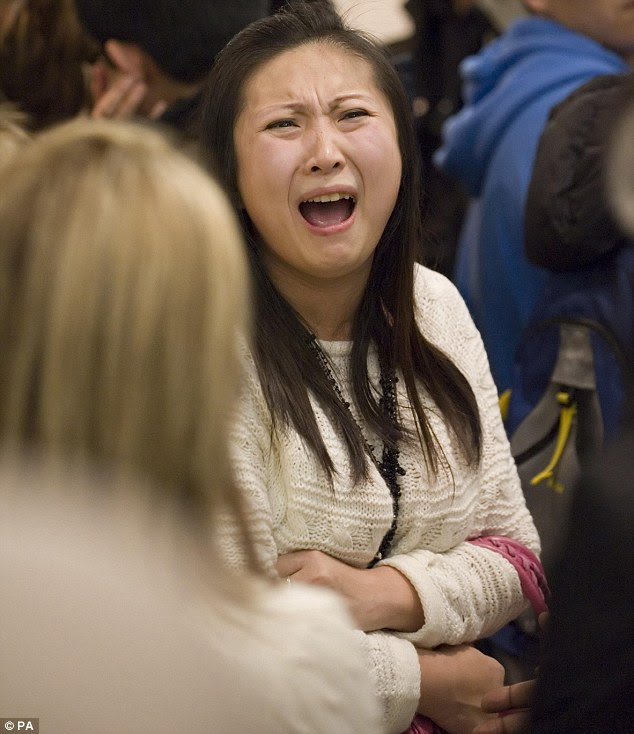 Why me? It all becomes a bit too much for one upset shopper in Selfridges, on Oxford Street, London 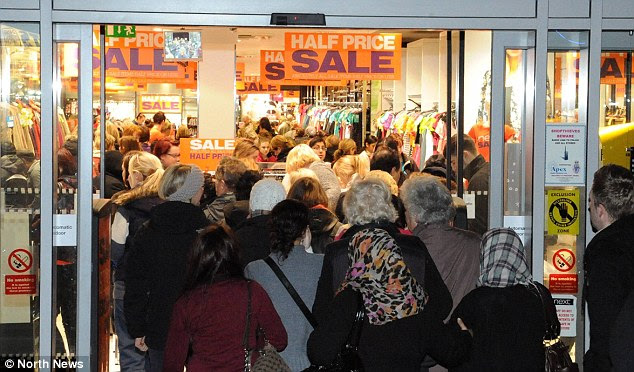 Sales rush: Shoppers flood into the Next store at the Silverlink Retail Patrk, North Tyneside when the doors opened at 6am

Serious shopper: Dedicated sales shopper Brenda Adams has been sitting outside Silcox Son and Wicks furniture store in Bath to be first in line for the sale which starts today 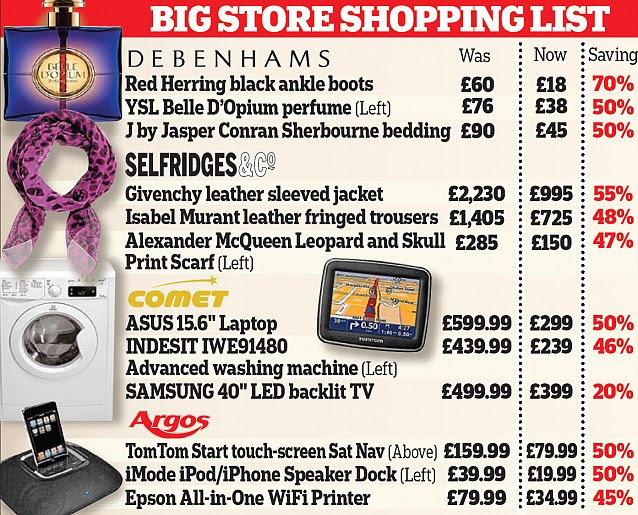 Nigerian couple Clifford and Lola Williams were also shopping for designer goods that were cheaper than back home.
An estimated 5.6million drivers took to the roads yesterday to grab a bargain while the high turnout in London came despite a Tube strike which caused disruption on every line in the capital.
Members of the drivers’ union Aslef walked out over a claim for triple pay and a day off in lieu for Boxing Day working.
Many shops stayed open for 12 hours in an attempt to attract as many people as possible.
Selfridges claimed it had seen its biggest-ever first hour of trading after opening four stores in England at 9am, with hourly takings expected to peak at £1.3million yesterday. The first eager shoppers started to queue outside the Oxford Street flagship at 10.30pm on Christmas Day and by the time the doors opened yesterday morning there were 2,000 waiting. 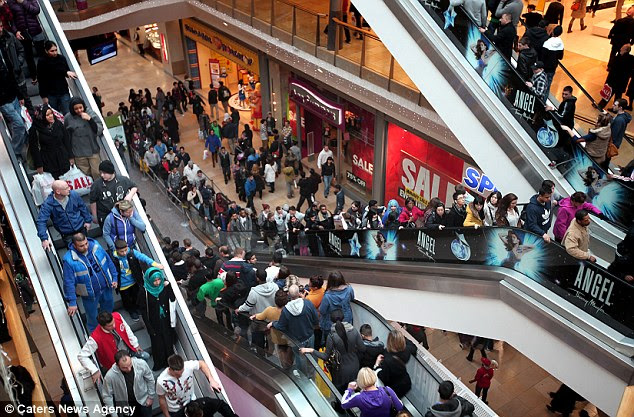 Packed! The Bullring in Birmingham was jammed with customers eager to take advantage of the slashed prices 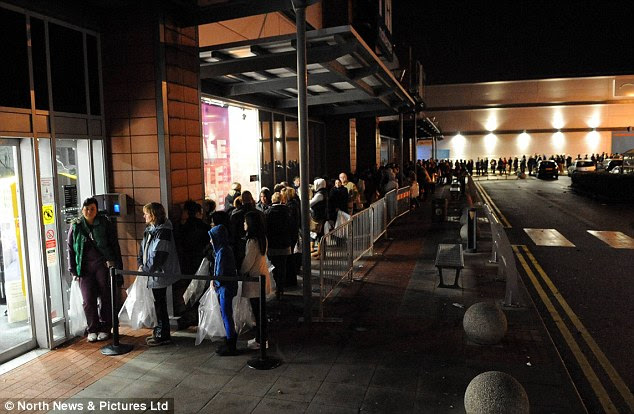 Early rush: A huge queue of shoppers built up outside Next at the Silverlink Retail Park before it opened its doors - at 6am

Women’s handbags and jewellery were the best sellers – the first transaction was for a £909 Miu Miu bag (down from £1,250) and the most expensive was for a £8,469 Chopard diamond necklace, reduced from £18,820.
At Cabot Circus shopping centre in Bristol, some shoppers had queued from 5am to get first choice in the early scramble for bargains.
Centre director Kevin Duffy said: ‘Cabot Circus has performed well over the festive season. In the week leading up to Christmas we saw a 19 per cent increase in shoppers visiting the centre compared with the same period last year. 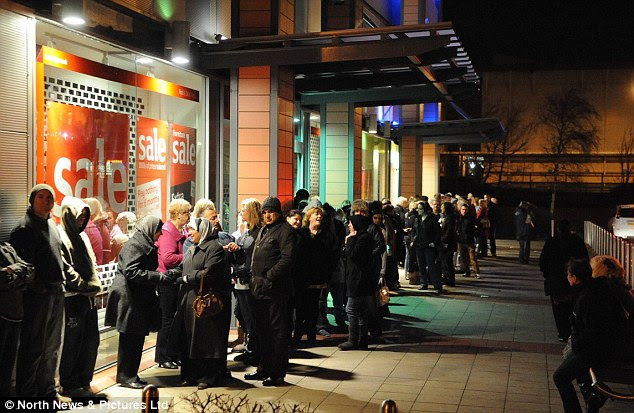 Bargains: Stores, like this Next outlet in North Tyneside, are slashing prices by up to 80 per cent to tempt hard-up shoppers into parting with their cash 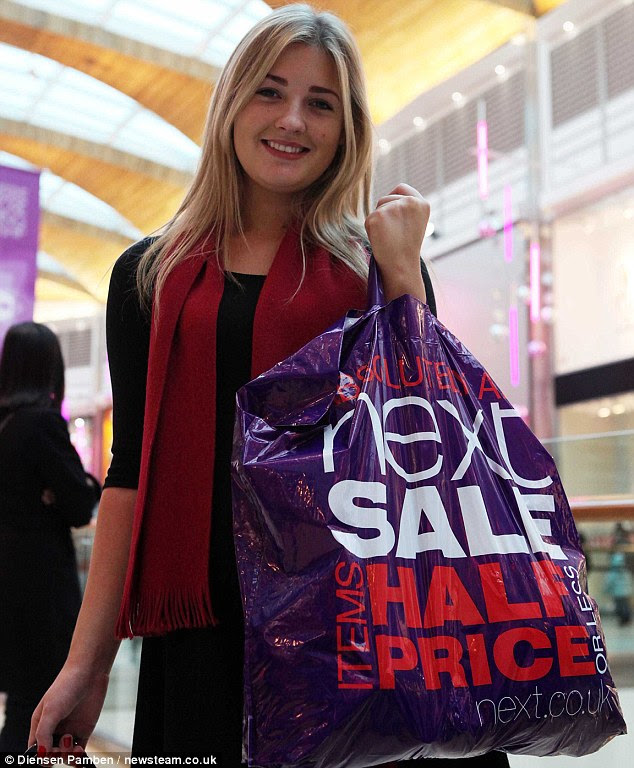 Success! Eleanor Cowlam, 18, joined thousands of shoppers at Highcross in Leicester to treat herself 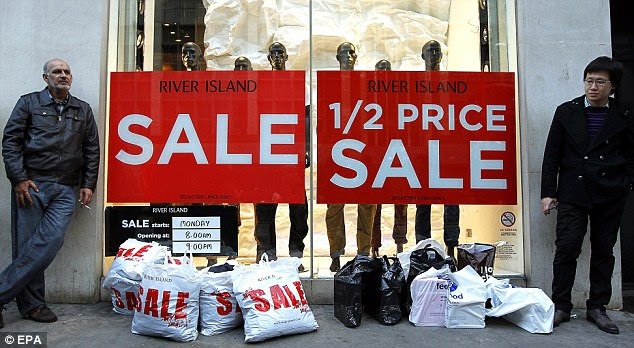 Guarding their goods: Two men pause to catch their breath on Oxford Street 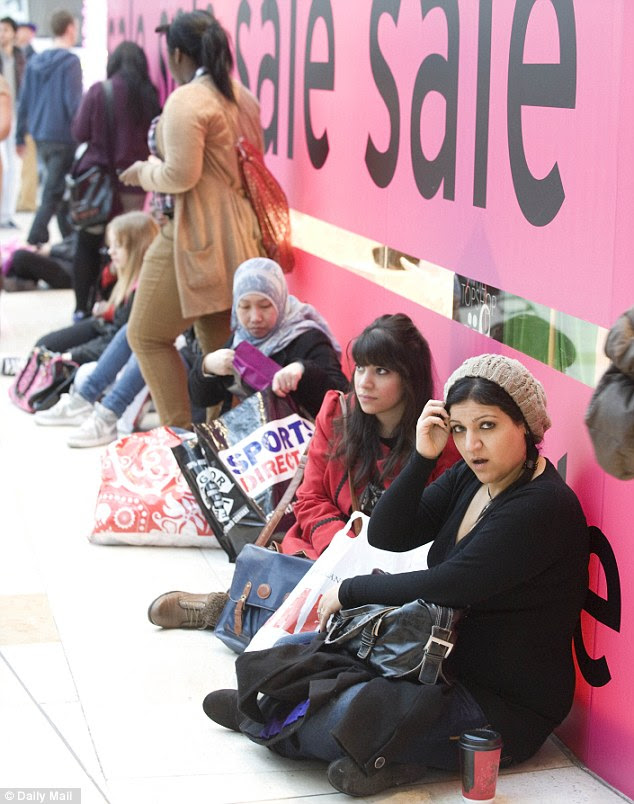 Pit stop: Shoppers took time out to rest their legs in the west London Westfield mall
Managers at the Liverpool One shopping centre said an estimated 125,000 people visited their stores yesterday.
At Birmingham’s Bullring retail complex, queues began to form as early as 2am. More than 2,500 eager shoppers were waiting by the time Next opened its doors and Selfridges saw an initial queue of around 1,000. The 160-store centre estimated that 9,000 visitors had hit its shops by 9am. Bullring general manager Tim Walley said: ‘There is a lot of talk about internet shopping but people still like to come out to shop and feel the goods.’
Traders in London’s West End said they had taken £15million in the first three hours of the sales. And John Lewis said it had received more than 1.5million visits to its website on Christmas Eve and Christmas Day, a 51 per cent increase year on year. 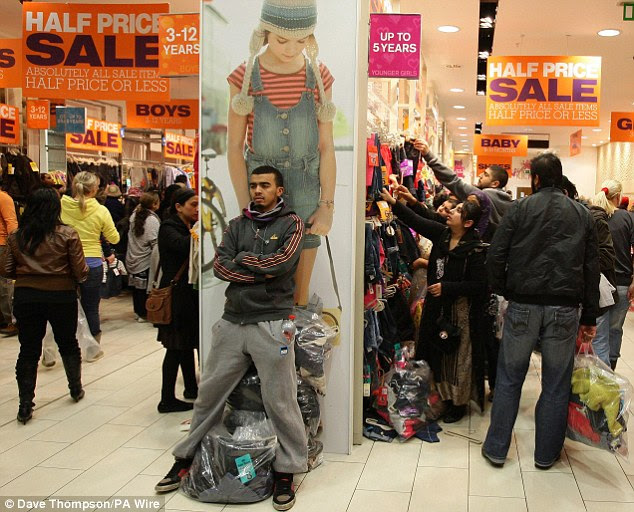 Test of endurance: One shopper looks thoroughly fed-up as he guards his shopping outside the Next Kids Boxing Day Sale at the Trafford Centre in Manchester 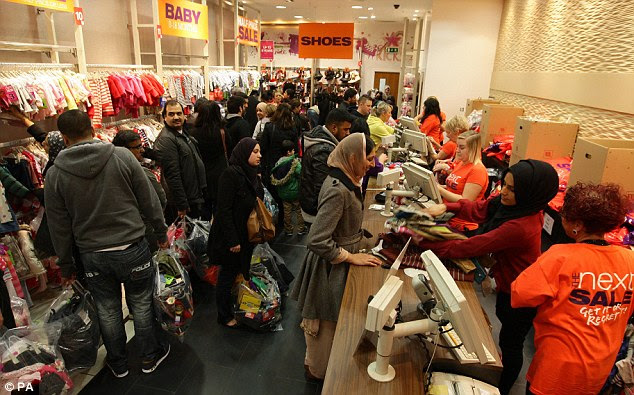 Let the sales begin! Shoppers dashed to grab bargains at the Next Kids Boxing Day Sale at the Trafford Centre in Manchester